It is a powerful decision making statement and use to control the flow of execution of statement. Program has two paths to follow, one for “true” condition and other for “false” condition. 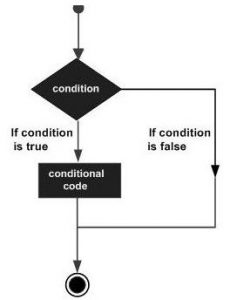 A switch statement can have an optional default case, which must appear at the end of the switch. The default case performing a task when none of the cases is true. No break is needed in the default case. 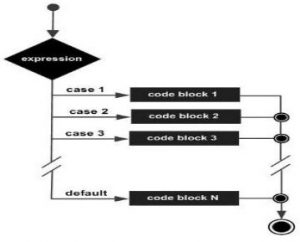 Exp1, Exp2, and Exp3 are expressions.

Repeats a statement until a given condition is true. It tests the condition before executing the loop body. 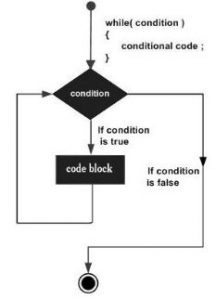 Executes a sequence of statements multiple times and abbreviates the code that manages the loop variable. 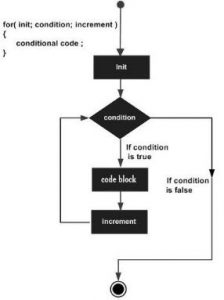 It is like a while statement, except that it tests the condition at the end of the loop body. 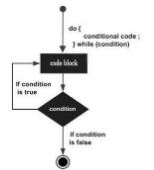 You can use one or more loops inside any other while, for, or do..while loop.

Causes the loop to skip the remainder of its body and immediately retest its condition prior to reiterating.

Transfers control to the labeled statement.

A function is a group of statements that together perform a task. C program has at least one function, which is main().  A function definition provides the actual body of the function.

strcat() to concatenate two strings, memcpy() to copy one memory location to another location.

This method copies the actual value of an argument into the formal parameter of the function.Changes made to the parameter inside the function have no effect on the argument.

This method copies the address of an argument into the formal parameter. Inside the function, the address is used to access the actual argument used in the call. This means that changes made to the parameter affect the argument.

This is called a single-dimensional array.

A pointer is a variable which contain address of another variable.

Strings are one-dimensional array of characters terminated by a null character ‘\0’.

strchr(s1, ch) : Returns a pointer to the first occurrence of character ch in string s1.

strstr(s1, s2) :Returns a pointer to the first occurrence of string s2 in string s1.

Structures : The struct statement defines a new data type, with more than one member.

A union is a special data type available in C that allows to store different data types in the same memory location.

typedef, which you can use to give a type, a new name.

char *gets(char *s) :function reads a line from stdin into the buffer pointed to by s until either a terminating newline or EOF (End of File).