NIC (Network Interface Card) – It works on physical as well as Data link layer due to its dual functionality. NIC of a system is a place where its MAC address is stored. The NIC is built into motherboard of the system. This ensures each system in a network has different MAC address due to different NIC on different system. 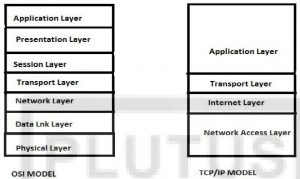 Fiber Optic cable-
● Fiber optic cables are constructed by glass or plastic inner core surrounded by
cladding. Cladding is further covered by specially designed jacket.
● Small in size and weight
● Expensive than coaxial cable and twisted pair.
● In this media data travels in the form of lights.
● Suitable for secured and long transmission
● This media is not vulnerable to electrical interference, impulse noise or crosstalk.
● Attenuation is low for fiber optical cable.
● Best for the connectivity of LANs.

2) Half Duplex- In this transmission, data is transmitted in both direction but one at a single time.

3) Full duplex- In this transmission data can be transmitted in both direction simultaneously.

Bus Topology-
● In Bus topology, different nodes within a network are connected together
through a common linear bus(cable).
● In this topology, transmission mode is half duplex means communicating devices
can be sender or receiver both but can send data only one at a time.

● Easy to connect a computer or other peripheral devices.
● Less Expensive.
● Works well in small area.
● Entire network gets shut down if there is break in main cable.
● Large amount of packets, collisions the network which may leads to high amount
of packets loss.
● Easy to understand
● Easy to expand
● Slower than ring topology

Star Topology-
● In Star Topology, All nodes within the network are connected to the central node which work as a hub or switch for all nodes.
● More Expensive due to usage of large number of cables.
● If one cable breaks down then only one node will not work and other nodes will work as they are working before.
● It is normally connected with bus topology to make a hybrid network.
● Hub acts as a repeater for flow of data
● Easy to Setup, Modify and troubleshoot
● Installation cost is high 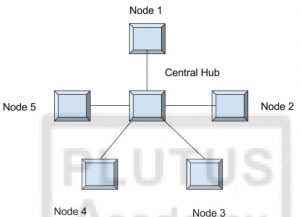 Ring Topology-
● In Ring topology each node is connected with two other nodes within the same network.
● This topology used large number of Repeaters.
● The transmission is unidirectional but it can be made bidirectional using two cables.
● Installation cost is low.
● Easy to Expand.
● In this topology data is transferred serially one bit at a time.
● Troubleshooting is difficult
● Failure one computer disturb the whole network.
● Deleting or adding nodes, cause the disturbance in the network activity 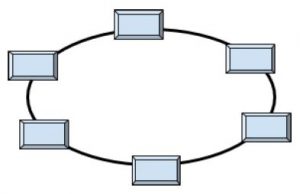 Mesh Topology – In Mesh topology a single node is connected with all other nodes available in the same network.
● There are two techniques to transmit data over the network.
1) Flooding
2) Routing
● There are two types of Mesh topology
1) Partial Mesh topology
2) Fully Mesh topology
● It is robust.
● Not Flexible
● Fault can be identified easily.
● Provides Privacy and Security.
● Most Expensive
● Cabling cost is more.
● Installation and Configuration is difficult. 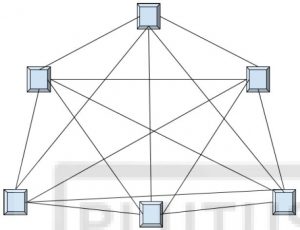 Tree Topology-
● In this topology, there is one root node and all other nodes connected to it in the form of hierarchy that’s why it is also called as Hierarchical topology.
● Used in Wide area network.
● If root nodes fails then entire networks fails.
● Costly
● Maintenance is difficult.
● Addition of nodes is easy 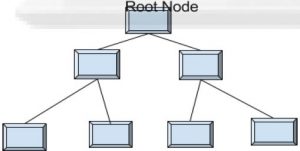 Hybrid Topology – It is a combination of two or more typologies.

● Inherits the advantage and disadvantage of the typologies that is included in the network.
● It is Flexible.
● Reliable as error detecting is easy.
● Costly
● Complex in design
● Size can be increased easily.
● Effective 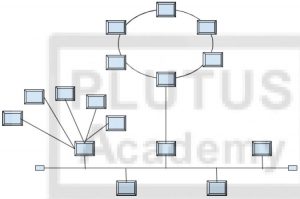 Q9.The internal network of a company is very large and would like to subnet into smaller parts. From the options given below, the device that will not be used to separate LAN and still protect critical resources is
1. The modem between computers         2. A router between subnet         3.An internal firewall         4. A switch between departments
Answer (1)