Computer Software is a set of programs  designed  to  perform  a  well-defined  function. A program is a sequence of instructions written to  solve  a  particular  problem.  Software is  a interface between user and computer.

There are two types of software

System software is collection of programs designed to operate, control, and extend the processing capabilities of the computer. 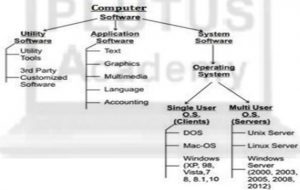 OS provide an interface between the computer user and hardware.