An Operating System  is an interface between a computer user and computer hardware. An operating system is a software which performs all the basic tasks such as file management, memory management, process management and controlling peripheral devices such as disk drives and printers. 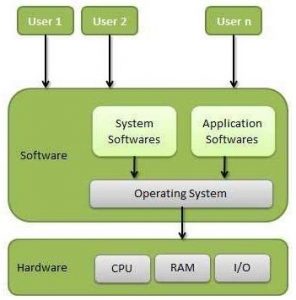 Following are functions of an operating System.

Memory management is the act of management computer Memory. Main memory provides a fast storage that can be accessed directly by the CPU. A program to be executed, must be reside in the main memory. An Operating System have the following activities for memory management −

Processor Management IBPS SO IT Officer Notes for Operating System

OS decides which process gets the processor for “how much time” and  “when”. This function is called process scheduling. An Operating System does the following activities for processor management −

Used by OS to organise and keep tracking of files.

An Operating System does the following activities for file management −

Batch operating system do not interact with the computer directly. User prepares his job on an off-line device like punch cards and submits it to the computer operator. To speed up processing, jobs are batched together and run as a group. The limitation of Batch Systems as follows −

Time-sharing is a technique which enables many people to use a specific computer system at the same time. Time-sharing or multitasking is a logical extension of multi-programming. Processor’s time which is shared among multiple users simultaneously is termed as time-sharing.

The operating system uses CPU scheduling and multi-programming to provide each user with a small portion of a time.

Advantages of Time-sharing operating systems are as follows −

Means data can be stored and processed on multiple location. It manages a group of independent computers and makes them appear to be single computer.

The advantages of distributed systems are as follows −

A Network Operating System runs on a server and provides the ability to manage data, users, groups, security, applications, and other networking functions. The main purpose of the network operating system is to allow shared file and printer access among multiple computers in a network, typically a local area network , a private network or to other networks.

The advantages of network operating systems:

The disadvantages of network operating systems are as follows −

Real time OS is a multitasking OS.it is designed to an event with in a predetermined time. The time taken by the system to respond to an input and display of required updated information is termed as the response time. The response time is very less as compared to online processing.

Soft real-time systems are less restrictive. A critical real-time task gets priority over other tasks and retains in the priority until it completes. For example, multimedia, virtual reality etc

Multitasking is executed multiple task at a time. An OS does the following activities related to multitasking − 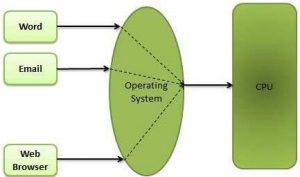 when two or more programs reside in memory at the same time, is known as multi-programming. Multi-programming increases CPU utilization by organizing jobs so that the CPU always has one to execute. 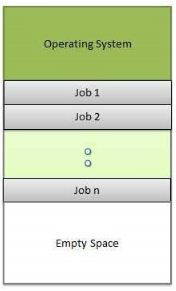 Spooling means to putting data of various I/O jobs in a buffer. This buffer is a special area in memory or hard disk which is accessible to I/O devices. 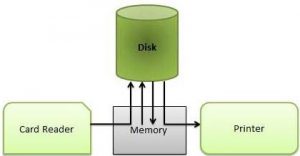 New : the process is being created.

Running : instructions are being executed.

Waiting : process is waiting for an event to occur.

Ready : process is waiting for a processor.

A Process Control Block represented in the Operating System for every process. The PCB is identified by an integer process ID (PID). PCB contains information that makes the process an active entity.

Information associated with each process:

2) Program counter: indicate the next instruction to be executed.

3) CU registers : Where process need to be storage after execution. 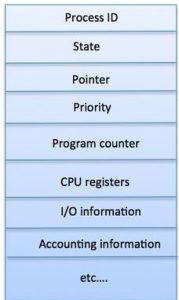