Directions(1-5): Study the following information carefully and answer the given questions.

M, N, O, D, E, F, G and H are eight members of a family. They belong to three different generations. There are three married couples. All of them are sitting around a circular table, facing the centre but not necessarily in the same order.

O and his sister-in-law are immediate neighbour.

1. Who among the following is G’s father?

2. How many females are there in the family?

3. What is the position of D with respect to her granddaughter?

b)   Fourth to the right

4. Who among the following is the aunt of E?

5. Which of the following represents a group of male members of the family?

Q1. Which of the following member is sitting sixth to the right of the second from the right end of the row?

(b) The one whose hobby is acting

(d) The one whose hobby is cooking

(a) The one whose hobby is acting

(c) The one whose hobby is cooking

Q3. Which of the following combination is not true?

C. Directions (1-2): Study the information carefully and answer the questions given below. There are two square fields of different size such that the larger one is surrounding smaller field. Four gates are there for each field in the middle of the sides. Eight people A, B, C, D, E, F, G and H are standing at different gates but not necessary in the same sequence. The persons who are on the sides of larger park facing center and The persons who are at side of smaller park facing outside such that inner sides persons and outer sides persons are facing each other. There is one person standing between B and D. C faces B. A is to the immediate right of C. G is not the immediate neighbor of D. G faces neither D nor F. One person is standing between H and F. E is facing the center  (SBI PO MAINS 2017)

Q1. Which of the following persons are facing to each other? 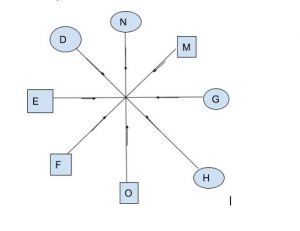 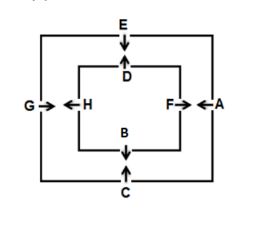